Berengaria pride of the Cunard fleet

BETWEEN 1920 and the entry into service of the Queen Mary in 1936, the Berengaria was the pride of the Cunard fleet. At the time of its launch, on 23rd May 1912, it was the world’s largest ship. 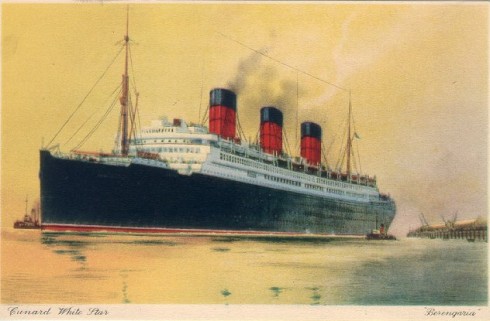 The Berengaria was eventually withdrawn from service on 23 March 1938 and was subsequently dismantled at Rosyth in Scotland in 1946.

In 1924 the “Berengaria” carried Rotary International President Guy Gundaker from the USA to Southampton on a visit to the UK.

In March 1929, three representatives of Rotary International – Raymond J Knoeppel (of the Constitutional and By-Laws Committee) and Past Presidents Frank L Mulholland and Guy Gundaker – sailed from New York on the “Berengaria” to discuss proposed constitutional changes with the executives of Rotary in Great Britain. They returned to New York on the “Berengaria” on June 5th.

In the same year a delegation of Rotarians from Europe travelled to America on the “Berengaria”. In a letter published in the “Rotarian” Stanley Leverton, Chairman of the European Convention Committee, wrote of the hospitality and kindness showed to them during their visit:

“May I express through the pages of THE ROTARIAN the most grateful and sincere thanks of the European delegation for all that was done for us during our stay in America.

Individually and collectively, we made so many friends that it would be impossible to write to them all personally, and yet I would wish this letter to be accepted as a personal one by the thousands with whom we came into contact.

The memories of those happy days will live with us until the end of things and words will never adequately express our joy and appreciation of it all. The New York Rotary Club gave us the hand clasp of welcome on our arrival and at the sailing of the Berengaria was there to say ‘au revoir’. But in between those two events we lived through the most crowded three weeks of our lives and received such hospitality and kindness, such expressions of of genuine friendship and affection that we know deep down in our hearts that you were as glad to have us as we were glad to be ‘haved’. And that was the greatest joy of it all – to want and be wanted.

To the men and women of Virginia and the Carolinas, to the fold of Georgia and Alabama, to our friends in New Orleans and Dallas, we say sincerely ‘thank you’: to our hosts in Nashville and Knoxville and to those in Washington and Philadelphia, we send our thanks as well.

Is there such an organisation in the world that can create and stimulate such friendships? I doubt it.

We hope that the great Gods of Kindness will be good to us all and that somewhere down the avenues of the future we may meet again. And what a meeting.

Keep us ever green in your memories dear people whom we met and rest assured that we shall always be thinking of you.

Gratefully and sincerely yours,

The Rotary Club of Limassol Berengaria Cosmopolitan continues in the “Berengaria” tradition of welcoming Rotarians from around the world and bringing them together.