(Extract from the “Rotarian” magazine)

THE relief team organized by the Rotary Club of Limassol-Berengaria Cosmopolitan, Cyprus, was expecting no more than one boatload of 500 evacuees from the fighting in Lebanon on 19 July.

But the following day, the volunteers who had originally offered to help find hotel accommodations for the new arrivals in the port city of Limassol were suddenly faced with a much bigger challenge.

“The Americans decided to reroute their largest ships to Limassol, and we found ourselves standing in front of thousands of people in need in an instant,” explains Scott Givhan, leader of the club’s relief project.

Military and chartered-cruise ships each carrying up to 2,000 people — most of them Australian, British, and U.S. passport holders — fleeing the Israeli-Hezbollah conflict were docking at all hours of the day and night, says Givhan.

At its peak, the operation brought in about 10,000 evacuees in three days.

The club assembled an efficient multinational team of volunteers from 10 Western and Middle Eastern countries. Each time a boat came in, they were on hand to greet, comfort, and assist passengers.

Nearly half of the Rotary club’s 25 members were on vacation. But those present and the non-Rotarian volunteers who joined them did an outstanding job providing food and refreshments and helping set up rest and play areas for evacuees and their children. They even offered evacuees use of their mobile phones to call loved ones and make travel arrangements.

“This project would not have been possible without the contributions from our non-Rotarian volunteers, many of whom worked through the nights to help the evacuees,” says Givhan.

With the evacuations ending, the club is turning its attention to helping people internally displaced by the fighting. Already, it has sent two shipments of relief items — mostly donations of food and medicine — to Batroun, Lebanon.

Members of the Rotary Club of Batroun are receiving the supplies and distributing them in their own cars at great personal risk. 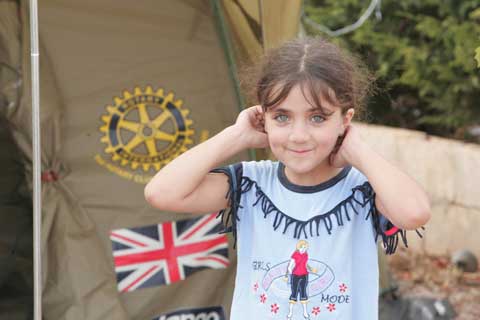 “We contacted this club because it is competent,” says project coordinator George Kfouri, of the Limassol-Berengaria club, who is Lebanese. “The members in Batroun are trusted, and they are like our own brothers.”

“These Rotarians are the real heroes,” says Givhan.

The city of Batroun, in northern Lebanon, is host to more than 10,000 people who have fled intense fighting and aerial bombardment in the south. Other Lebanese Rotary clubs are helping with the relief effort.

Rotary clubs were the first to respond to the humanitarian crisis in Batroun, say Givhan and Kfouri. Because Rotarians are members of the affected communities, their aid distribution network is one of the most active in the region.