A market stall and raffle helped the Rotary Club of Limassol-Berengaria Cosmopolitan raise more than €1,800 for the Theotokos Foundation’s ‘Το Αλμα’ child development centre, Friends for Life Limassol hospice and other Rotary causes.

The management of the Asomatos Flea Market generously donated a stall for the Club’s 2 day fund raising event, which was held on the Saturday and Sunday before Christmas. The Club’s Public Relations committee contacted the media and announcements promoting the event were broadcast on Coast FM and BFBS Cyprus radio stations, and printed in the Cyprus Weekly’s ‘Coming Events’ guide.

Local shopkeepers in Episkopi and Erimi displayed eye-catching posters in their windows announcing the Club’s Charity Stall and Raffle. 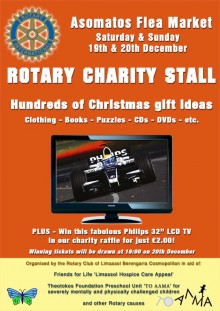 Thousands of people visited the market over the weekend, many of whom were cajoled into buying raffle tickets and items from the stall by teams of eager Rotarians. On Saturday, PP Scott Givhan and his wife Christin brought their family along and sent their young sons into the market clutching books of raffle tickets – they returned a few minutes later with their pockets bulging with cash.

Some of the market traders donated raffle prizes and items to sell. ‘Absolutely Fabulous’ was particularly generous; as well as raffle prizes and other items, they gave 20% discount vouchers to anyone spending €10 or more at the Rotary stall.

With time running down until the winning numbers were drawn, Rotarian Same al Akhouan was immersed in a sea of some fifty shoppers furiously selling the last few raffle tickets.

The winning ticket, number 3, was pulled from the hat by a young girl from the crowd – and the first prize, a 32” Philips LCD television, was won by a delighted Marina Alonefti from Limassol.

Commenting after the event, President Nigel said “The market stall and raffle were the idea of Rot. Same and I am delighted that we raised so much money. In the present economic climate we should not rely on the continued generosity of our major sponsors; we have to look at other opportunities for raising funds. Events such as this are relatively easy to organise and they make money; and just as importantly, they help promote Rotary within the wider community”. 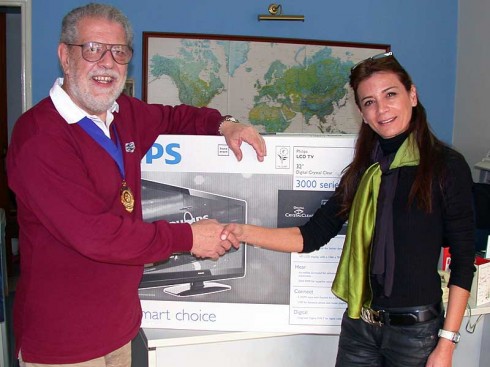