The  History of the Rotary Club of Nicosia

The Rotary Club of Nicosia was founded by Governor Merton on June 30th 1938 and it was the first Rotary Club to be founded in Cyprus. The founder Members were:-

The members included people of various nationalities and religions but with one and only goal “Service Above Self”. The English language was adopted for the weekly meetings of the Club.

During the Club’s first 25 years, which included the Second World War, the Club’s activities were somewhat limited to matters concerning community welfare and included supplying shoes and clothing to children in need at Christmas and Bairam.

At the end of the War, and in 1949, the Club sponsored a scholarship for a Cypriot to study abroad modern techniques of education for the Deaf and Dumb children. On his return, the Club founded the School for Deaf Children and continued to run it for the next three years, until responsibility for the school was undertaken by the Government of Cyprus. Since that time, the Club has maintained close ties with the school and assisted in the rehabilitation of the young men and women leaving it.

The Club continued its activities by donating and contributing to the School for the Blind, the Children’s Hospital Wards, the Kyperounda Sanatorium and the School for the Deaf. Regular features of the Club’s Community Service activities were the provision of presents and entertainment for needy children, old people’s homes, hospitals etc.

An event worth mentioning here is the visit in 1954, for the first time in Cyprus, of the President of Rotary International Mr Seratosa Simbil.

With the Declaration of Independence in 1960, the Club’s most important executed projects were:

b)    the donation to the Government of Cyprus of a mobile Dental Unit for use in schools at a cost of 5000. This initiative prompted the Government to acquire a number of mobile units to serve every school on the island.

c)    The organization of various campaigns for example Safety Week, Tree Planting and the creation of a friendly forest near Larnaca in association with other Rotary Clubs etc.

d)    Since 1950, the Club has assisted with the creation of other Clubs sponsoring the formation of the Rotary Clubs in Limassol, Larnaca, Famagusta and Kyrenia.

Our Club was again, for the second time, the host of the President of Rotary International, Mr. Roy Hickman who visited Cyprus in 1972 during the presidency of P.D.G. Takis Karakannas. A third visit by a RI President was in 1988 by Mr. James Lacy.

It should be mentioned that the Club made efforts towards the success of the negotiations for solving the Cyprus problem. To that end, two weekly meetings were organized, one at the Ledra Palace Hotel and the other at the Serai Hotel with speakers the then negotiators Mr. Glafkos Clerides and Mr. Raouf Denktash. These two friendly Rotarian meetings were of paramount importance as it was expected that the negotiations were about to be concluded successfully.

The Rotary Club of Cyprus was the initiator for the organization, for the first time, of the wives of the Rotarians ie the Inner Wheel as well as the first  Interact Club at the English School.

Over the years, the club has funded many projects both locally and internationally. It has sponsored an International Workshop on Thalassaemia – a disease which plagues many countries but has been controlled to a great extent in Cyprus.

The Club donated 10,000 for the establishment of the Day Centre at Arodaphnousa of the Anticancer Society of Cyprus, where cancer patients can spend rehabilitation time.

During the last two decades, four Rotary Clubs were established sharing the territory of our Club ie Nicosia these being Ledra, Lefkothea, Aspelia with  the exiles clubs Salamis and Kyrenia being the exiled clubs.

The Club has endeavored over the years to support both financially and morally  our Rotaract and Interact Clubs.

The Club boasts it own premises where the archives, awards and history of the club are stored.

The Rotary Club of Nicosia as the first Club in Cyprus had the privilage to participate in Rotary Internationals’ official Celebrations by ringing the Centenial Bell. The Ceremony took place at the Hilton Hotel and DG. Samir together with PP Felix Cirilli de Nores, as the oldest Rotarian joined P Nicos to ring the Bell. 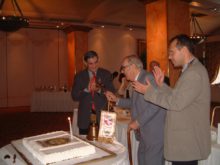