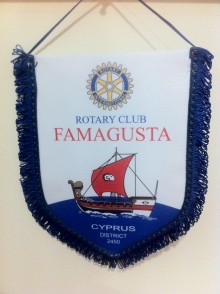 The Rotary Club of Famagusta is temporarily operating in Limassol since 1974 due to the Turkish invasion of Cyprus and the occupation of Famagusta by the Turkish army and the expulsion of its legal inhabitants from their homes.

The Rotary Club of Famagusta was chartered in 1954 in its hometown. The Club temporarily operates in Limassol by special concession from Rotary International by which the territory of Famagusta is extended to include Limassol, until a just and viable solution is found for the Cyprus problem.

The Club’s emblem is a combination of the Rotary wheel and the ancient boat of Salamis – the ancestral of Famagusta – a town which for a thousand years, was the most important kingdom in Cyprus, both with regards to civilization and economic growth.

Over the years of its existence, the rotary Club of Famagusta both in Famagusta and in Limassol, spared no efforts to perform charitable work and extended help in many ways, both to individuals and organised groups of people.

Both the old and the new members of the Rotary Club of Famagusta are bound together with friendship and have an excellent relationship with their social environment. Their solidarity is of the highest level, because their occupied town of Famagusta strongly unites them with the hope and belief of a quick return to their beloved land.