The coming of the “Rotary Global History Fellowship” to Cyprus is a very significant event for the Cyprus Rotary as well as for the RGHF. This was done by its Founder Jack Selway, under very quick conditions in only 24 hours, as follows:

Jack Selway, the Founder of RGHF, was with his wife on a cruise in the Mediterranean, on the way to Egypt, Cairo, for addressing the big event for the “RGHF Day” on 3 October 2009, organized by our Rotary District 2450 and our District Governor Nijad Al Atassi, who, as we know, gave great importance to this event.

Matts Ingemanson, President of RGHF during 2004-2006, with an e-mail sent on 29 September 2009 to Jack Selway, suggested that, although he would stop to Limassol for only a few hours, it would be nice if he could meet Rotarian Christodoulos Achilleoudis, whom he knew from visits to the Rotary Club of New York. After exchanging a lot of e-mails and telephone calls during that day, it was arranged to visit the Meeting of the Rotary Club of Limassol, which Jack already knew from Panagyiotis Katrougalos, member from Greece, that would take place next day. So, it started the whole story.

On Wednesday 30 September 2009, just as Jack came out to Limassol, instead of other visit, he walked with his wife Sherry from the harbor to Holiday Inn Hotel and participated at 1.00 pm in the Meeting of the “Rotary Club of Limassol” under the Presidency of Dinos Michaelides, with result the founding of RGHF in Cyprus by its Founder and pinning the first 3 members. After the Meeting, he was brought to the harbor and continued his cruise. As Selway stresses, Cyprus is the first country of the Rotary District 2450 that he visited and pinned himself the first 3 RGHF members. These members have been registered on the International Roster of RGHF, as well as on the web page www.11october.org, in the Chapter “30 September 2009 Rotary Global History Day-Cyprus, Zone 20b” together with their photos and the following inscriptions:

During the big event for the RGHF in Cairo, which followed on 3 October 2009, 30 new members were subscribed from 9 Clubs of Egypt.

Rotary Club of Nicosia-Lefkothea, embraced the idea and on 19 October 2009, the following15 new members of RGHF were announced:

After this event, Rotary Club of Nicosia-Lefkothea was recognized by RGHF as the first in the world of RGHF with such a great number of new members in one day and from the same Club.

All members are included on the web site in the International Roster of RGHF, each one with the number of the Zone and District number (20b 2450), followed by the name of their Club (Nicosia-Lefkothea) and then Cyprus. The most important: With one “click” on the name of each member, opens not only this member’s details, but also the web site of his Club: Nicosia-Lefkothea or any other member’s Club. This is something really worthwhile for the whole Cyprus Rotary and our District, which can be seen by everyone from whatever part of the world, something which was not so easy to see before.

Rotary Club of Nicosia-Lefkothea, Cyprus, District 20b 2450, been declared as World Record of RGHF Membership, honored this with another 56 new members in a period of less than one month (19 October – 19 November 2009), coming to the total of 72, as follows:

After the above, Rotary Club of Nicosia-Lefkothea was recognized as the first 100% RGHF Club in the world, with the following official announcement:

“RC of Nicosia-Lefkothea, Cyprus is our first 100% RGHF Club with 72 members joining. Each of the members will receive a copy of Paul Harris’ “My Road to Rotary.” The Rotarian who made this possible is their past president Chris Achilleoudis. Also, it was Matts Ingemanson, past chair of RGHF who arranged for Chris and RGHF CEO Jack Selway to meet while the Selway’s were visiting Cyprus on 30 September 2009”.

During the “RGHF 10th Anniversary Meeting” in Chicago (10-12/10/10) PP Christodoulos Achilleoudis was invited and gave 3 successful Power Point Presentations about the First World Records of Nicosia-Lefkothea, as well as about Cyprus, the Island of Aphrodite. See relative photos below: 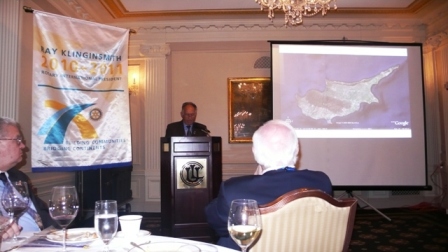 Power Point Presentation of PP Achilleoudis at the RGHF Welcome Dinner, 10/10/10, on the subject: RC of NICOSIA-LEFKOTHEA, Cyprus, the First 100% RGHF Club in the World