Projects under the Presidency of Popi Kanari 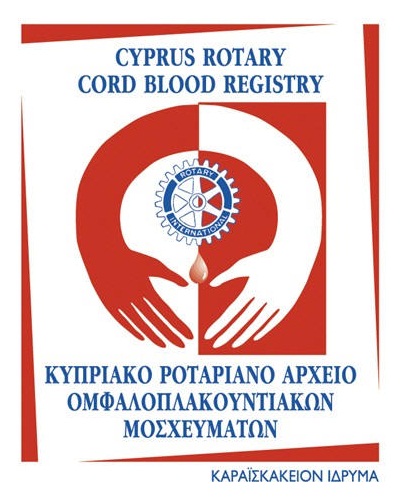 Since its establishment, five years ago, “The Cyprus Bone Marrow Donor Registry” at the Karaiskakio Foundation has grown to become one of the largest registries of its kind in the world. It has the highest number of donors per capita and the twelfth highest absolute number of donors in the world. It has a bicommunal character and it is operating worldwide through its participation in the international donor registry “BMDW”. Of its 90,000 registered volunteer donors today, nearly 14.000 are Turkish Cypriots and the rest Greek Cypriots. Just recently the Cyprus Bone Marrow Donor Registry has joined forces with the “NMDP” in the USA (the largest registry in the world) by becoming an NMDP collaborative registry.

Because of the large genetic heterogeneity of our population, a number of patients in need for bone marrow transplantation is unable to find a suitable donor among the donors in the local or the international registries. In cases like these, an alternative source of haematopoietic stem cells to bone marrow is placental derived cord blood. The cord blood, usually discarded as a waste by-product of pregnancy, contains a large number of stem cells enough to reconstitute the functions of bone marrow when transplanted in a child with leukaemia. Due to its premature stage of immunological development, the cord blood cells can be transplanted in patients without a being fully compatible and thus providing a good chance of finding a suitable graft for patients with rare tissue types among a relatively small number of stored grafts.

The Karaiskaikio Foundation has built over the years a good scientific and technological infrastructure during the establishment of a Bone Marrow Registry. With the support of Rotary Clubs. Firstly RC Nicosia-Lefkothea already donated, through a matching grant,5 years ago equipment worth $34000 to the formation of this Registry. More equipment was bought a year after with a further $30000 donation from the Rotary Clubs of Nicosia (Lefkothea, Nicosia, Aspelia, Salamis)and that of Kyrenia who jointly organised a fund raising event to raise this money. The Support of the Rotary Clubs in Nicosia has helped the Bone Marrow Registry in Cyprus to become one of the best in quality and number of Donors in the world.

The scientific staff of this Registry is well trained and with high qualifications and can be the nucleus of a newly established Cord Blood Bank/Registry which can be an extension to the already existing and well respected Bone Marrow Registry.

The above Project was proposed by the Rotary Club Nicosia Lefkothea, Ditsrict 2450 and another 9 Clubs joined in to successfully complete this project

The total of ten Rotary Clubs will work together in Fund Raising events and activities for celebrating the Centennial Year.

The Date of completion of the project was the end of February 2005.

The project has been given the full support of the Ministry of Health, which will help the project by providing free services by the Haematology Department.

Also the project has been supported by the Pancyprian Gynaecological Association and other Humanitarian Organisations in Cyprus.

The aim of the Rotarians is to establish at Karaiskakio Foundation a cryobiology centre for the directed storage of cord blood units from siblings of patients with leukaemia, thalassaemia, or other haematological disorders. This centre with be further developed into a public cord blood registry to store cord blood units from volunteers to be used to unrelated patients (usually children) who cannot identify a suitable bone marrow donor.

To establish this centre there will be a need to build an extension to the already existing infrastructure and provide all the necessary training to the technical and clinical staff that will support the centre.

The implementation will be divided into four stages:

This will cover the dissemination of all information necessary for the importance of the establishment of such a Registry through the support of gynaecologists and the active involvement of Rotarians while using all mass -media. The cost of this campaign will be approximately 5000 ($10000).

This will cover the building of storage facilities (a cryopreservation laboratory) and a reception room. The estimated cost for the basic laboratory infrastructure is £15.000($30000 This laboratory will be an extension to the new building that will house the Cyprus Bone Marrow Donor Registry.

For the establishment of the cryopreservation laboratory there will be a need for equipment as well. The facilities will include controlled rate freezers, liquid nitrogen storage tanks, pressurized liquid nitrogen supply tanks, biological hoods and other basic laboratory equipment.

Training of technical staff and medical staff will be necessary and for this training at similar centres or hospitals abroad the cost will be about £5.000($10000)

The Rotary Clubs involved will undertake both jointly as well as individually fund raising events to cover the total cost of the project. Such events will be Gala dinners, barbecue get together parties, lottery, competitions sponsored by private companies. These events will start as from 2003 and finish by February 2005.The total amount of money needed is estimated to be about 70.000($140.000)

The above project is believed to be:

The project will provide the following benefits:

1. The establishment of the cord blood registry will directly benefit young patients in need of bone marrow transplantation who are unable to identify a suitable donor in the established bone marrow donor registries.

2. Will give hope to young Cypriots living both in Cyprus and abroad.

3. Advance health services in Cyprus that can also be provided in the future to other patients all over the world

4. Enhance the scientific infrastructure of Cyprus in the area of Health

5. Will give Cyprus a unique position worldwide whereupon it will be, by population, an extremely small country with the largest Bone Marrow Registry which will have attached to it a Cord Blood Bank as well.

Benefits to the whole world

2. For all Cypriots living anywhere in the world the services provided by the Cord Blood Registry will be free. For non Cypriots there will be a fee equivalent to the fee of the Public registry of that country requesting cord blood.

The project will be well sustained as the Blood analysis will be covered by the Haematology Dep. Of the Ministry of Health, Also consumables will be paid by the Ministry of Health. The Karaiskakion Foundation already has the infrastructure to build this extra registry to the already existing Bone Marrow registry so it only needs cryoscopic methods for preserving the cord blood. This new equipment that will be bought by the Rotary Clubs of Cyprus will be under the umbrella of the Karaiskaion Foundation and will be used by well trained professionals at the Foundation.

Fees will be paid by all countries requesting cord blood for their patients except Cyprus. Therefore income will be coming from this source as well.