Projects under the Presidency of Costas Georgallis

For this project started the procedure of a Matching Grant, in cooperation with District 7710 and 14 Rotary Clubs within the District (contribution $10.000) and our Club (contribution $10.000), under the coordination of Rot. Popi Kanari. The Matching Grant was approved and the total amount of $33.644 was raised two years later and given to the Foundation. (Photo below): 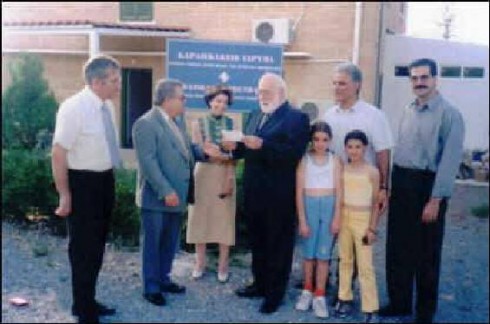 Delivery of the cheque of the Matching Grant to the President of Karaiskakion Mr. Efstathiou

With various activities our Club tried also to support the above Foundation to increase the bone marrow donors registered at the Bank.

Project for the Sound Pollution in closed areas

Project for the Sound Pollution in closed areas where mainly young people frequent. (Discos, bars etc.). The results, which were disappointing, were given to the Ministry of Health of Cyprus for further action.

A Prize of £1000 was awarded equally to 4 students of the University of Cyprus for “Outstanding Community Service”, in memory of the member of our Club and Professor of the University Michele Kefala who passed away on 2 June 1999.

Twinning with the Rotary Club of Sahel Metn, Lebanon